Amaranth is a tiny seed originating from South America and the Himalayas. It is similar to quinoa in that it cooks like a grain, yet it is completely grain-free (so there in no gluten in amaranth).

Amaranth nutrition: amaranth has an impressive nutritional profile. It contains a significant amount of protein and is particularly high in the amino acids lysine and methionine. It is also high in minerals, specifically magnesium and calcium.

Though I have never had the pleasure of trying the real thing, I learned that popped amaranth treats are sold by street vendors in Mexico and India. They are typically sweetened with a sugar solution and in Mexico, there are called alegrias.

While toying with some new amaranth recipes, I came up with version, sweetened with a combination of pomegranate molasses and agave syrup. These have a really unique flavor, and make a nice gluten-free and vegan snack or dessert.

Pomegranate molasses is available in Middle Eastern or natural food stores and I love its’ tangy sweetness. Many different alternative sweeteners could be used in this recipe, though. You can try brown rice syrup, maple syrup or standard molasses, (or honey, but then the amaranth cookies won’t be vegan) or any combination of these; you could also add a little cinnamon. If you are not using the pomegranate molasses, you might also want to add some lemon or lime juice.

If you don’t have or want to use pumpkin seeds, you can use a different nut or seed, such as chopped toasted almonds or sunflower seeds. You can also make these nut or seed-free, and just double the raw amaranth to 1/2 cup. Another type of dried fruit can be substituted for the cherries or leave it out completely. Next time, I might try these with dark chocolate chips…

Directions:
Rinse amaranth seeds in a fine mesh strainer and let sit for about 30 minutes so they are dry. Place a wok or cast-iron skillet over high heat. Add the raw amaranth. Stir around with a wooden spoon as the amaranth seeds begin to turn brown and toasty. Then they should start popping. Be aware that if the pan isn’t hot enough or if you add too much amaranth at once, your seeds may not pop, and they might just burn. (For this reason, you may want to add only a tablespoon of amaranth at once, and remove them as soon as they’ve popped).

If the pan is hot enough though, and if you continue to stir the seeds around, most of them should pop and turn white. Watch that they don’t burn. When most of the seeds have popped, remove from the heat and set aside to cool.

In a small pot, heat the pomegranate molasses and the agave syrup. Bring to a boil and then reduce heat to a simmer. You want the syrup to thicken and reduce somewhat, and this will happen after 5-7 minutes.

While the syrup is thickening, toast the pumpkin seeds in a dry skillet over medium heat until they pop (this will take 1-2 minutes; stir often and watch that they don’t burn). Add to the popped amaranth, and then add the dried cherries.

Pour the syrup over the seeds mixture, and working quickly so that all the syrup is incorporated before it starts to dry and harden too much, mix all the ingredients well. Using your hands, press into small balls (you could also press the mixture into a pan lined with parchment paper, and then cut into squares or rectangles). Allow to to cool before eating.

For more information about how to cook amaranth, see the easy amaranth recipe on my gluten-free grains page. 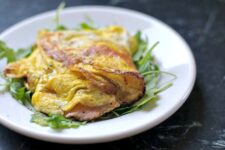 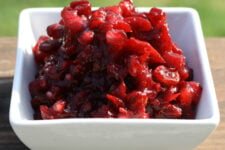 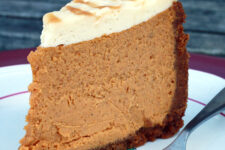 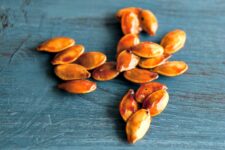 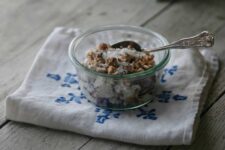 Steel-Cut Oats with Coconut and Pomegranate