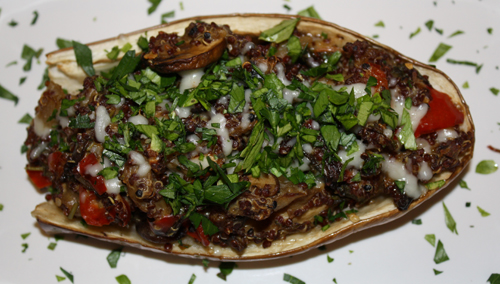 I think one of the best things about having a recipe blog is being able to participate in food-related community blogging events. So when I read about Foodie Fights, an online cooking challenge in which you “compete” against six other bloggers, I was intrigued and sent in my blog’s name for consideration.

I was quite surprised and fairly nervous, though, when I got an email a few days later informing me that my blog had been chosen to participate in a Foodie Fight this week…

Each Foodie Fight features a different pair of “mystery ingredients”. This week’s challenge was to use eggplant and white wine together in a recipe. After LOTS of internal deliberation about what I would make, I came up with a healthy and delicious vegetarian stuffed eggplant (to see what my competitors made, and to vote for the best eggplant and white wine recipe, please go to the bottom of this post!)

The vegetarian stuffing is made from diced garlic, onions, eggplant, mushrooms, red peppers and Swiss chard sautéed in olive oil, butter, and white wine. To increase the protein content, I added cooked quinoa and toasted pumpkin seeds, as well as a mixture of egg, Greek yogurt, cottage cheese, and parmesan cheese (these also act as a binder).

My stuffing does not contain any breadcrumbs, so it is low-carb and gluten-free (though if you are vegan and don’t want to use the eggs or cheese, you may actually want to throw some in to give the stuffing a bit more texture and to help everything “stick together”). 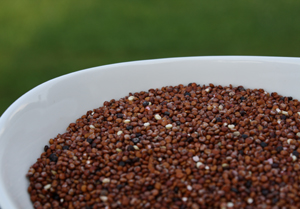 I found the “red quinoa” you see on the left in the bulk section of my local natural foods store, but you could certainly use regular quinoa instead.

You could also use brown rice or any other cooked whole grain like buckwheat, barley, or millet (buckwheat and barley do contain gluten, though).

Quinoa must be rinsed very thoroughly in a fine mesh strainer before cooking, as the seeds have a natural coating on them that tastes bitter if not removed. I usually cook mine in a rice cooker, but you can also cook quinoa in a pot on top of the stove; 1 cup quinoa and 2 cups water will yield about 3 cups of cooked quinoa. 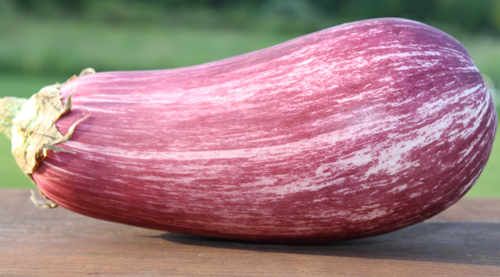 Directions:
Preheat oven to 400°F. Slice off the top of the eggplant and cut it in half lengthwise. Scoop out the eggplant pulp so that the “shell” is about 1/4 inch thick.

Dice the eggplant pulp and set aside. Choose a baking dish that will accommodate your stuffed eggplant halves and rub it with olive oil.

Add another 1 Tb. of the butter and allow it to melt a bit. Add the mushrooms and stir around so they absorb some of the butter, and then add the rosemary, the diced eggplant, and the white wine. Increase the heat a bit and allow to simmer until all the wine is cooked off. 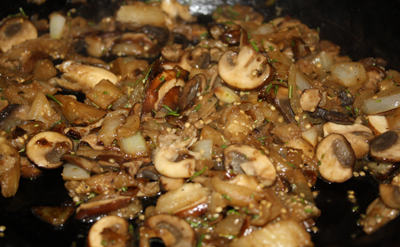 Add the diced red pepper and the chard and cook over low heat, stirring occasionally and adding a bit of water or olive oil to the pan if it is too dry, for a few more minutes. Add 1/2 tsp. salt and remove from the heat to cool.

In a large bowl, mix the egg with the Greek yogurt, the cottage cheese, and the parmesan cheese. Add the cooked quinoa and the cooled sautéed vegetables. Mix well. 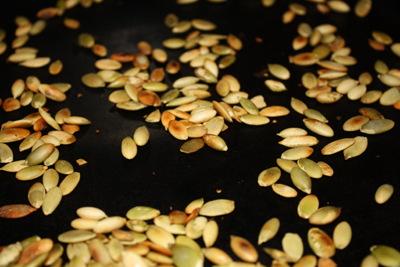 Wipe your skillet clean and sprinkle the pumpkin seeds around the pan.

Toast over medium heat for 1-2 minutes until the seeds “pop” and turn golden brown (watch carefully and stir around frequently so they don’t burn).

Mix the toasted pumpkin seeds into the stuffing mixture. Take your hollowed eggplant halves and fill them with the stuffing. 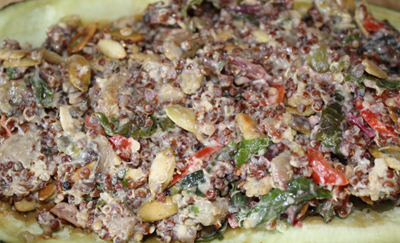 Place in your baking dish and cover with foil. Bake in the preheated oven for 25 minutes, uncover and bake for another 25 minutes, then sprinkle with additional parmesan cheese and bake for a final 5 minutes until the cheese is melted. Garnish with the finely chopped fresh parsley.

One stuffed eggplant half makes a hearty vegetarian meal for one pretty hungry person, or you can slice each half into pieces and have smaller servings for more people. You will have stuffing mixture leftover, and this can be used to stuff an additional medium-large eggplant, or you can use it to stuff peppers, zucchinis, etc! These are delicious as cold leftovers, too…

Here are the blog posts I am competing against…make sure to check them all out before you cast your vote!

Cookin’ Canuck
My BF Likes it, So It Must Be Good
Om-nom-nomnivore (LazySumo)
Peanut Butter & Jenny
Prix Fixe 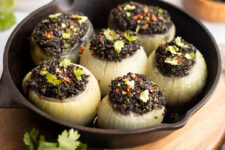 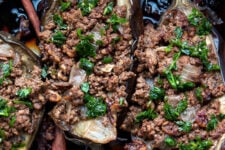 What I’ve Been Reading + Lamb Stuffed Eggplant from Jerusalem: A Cookbook 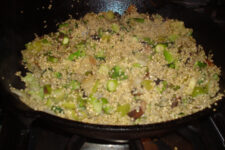 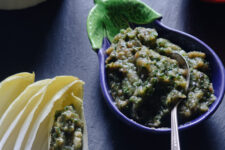