Two nights ago, when Thanksgiving dinner was over, all I could think about was this turkey pho. I know the blogosphere is chock full of great recipes in which you can put your turkey leftovers to use, but ever since I started making turkey pho last year, it’s pretty much the only thing I want to do with mine.

I was planning to make the pho the next day for breakfast, and I really couldn’t wait. 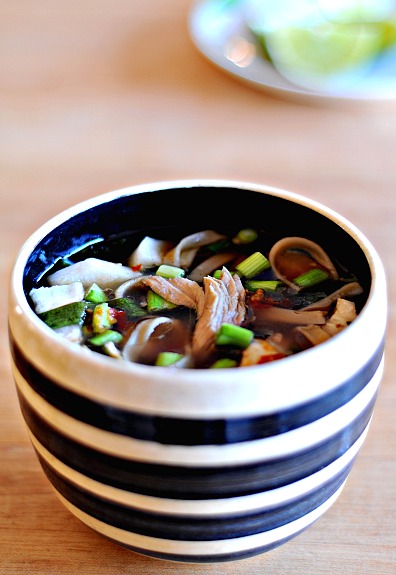 So I set aside all the leftover meat. Then I got out my giant stockpot, filled it with the picked over turkey carcass, and popped in some large chunks of fresh carrots, onion, and celery. I added some thyme, rosemary, and parsley, a little apple cider vinegar, and lots and lots of water. A short while later, the liquid was bubbling nicely and it was filling my house with the most heavenly aroma. I was fantasizing about how good the stock and the subsequent pho was going to be, and was just about to get started with the big post-Thanksgiving clean-up, when my 8 year old daughter started screaming.

She’d managed to injure her finger pretty badly in our basement. I am not 100% sure what happened: let’s just say my kids were doing something they thought was fun, but that they knew was probably not very safe, and the treadmill was involved. The finger in question looked pretty banged up and was VERY painful (she wailed for more than 2 hours), but we decided that driving 45 minutes to the closest ER to wait for goodness knows how long was probably not how we wanted to spend the rest of Thanksgiving.

I promised to take her to the walk-in clinic in town first thing if it was still hurting terribly the next morning.

It was…and it’s broken. She’s in pain and I feel terrible about that, but I am glad it’s just a small fracture. It will heal soon.

So I didn’t get to have pho for breakfast. By the time we got home from the doctor and I got the clean-up- that-never-happened-after-Thanksgiving-dinner done, it was the afternoon. I made sure Maddie was comfortable, cooked up the pho, then sat down to enjoy my soup. Remember that Calgon commericial? Calgon…take me away? Well this pho was calgon in a bowl for me: the exotic, nourishing broth and its contents transported me away from the worry and stress of the previous hours.

I changed up the spice mix from last year’s recipe just a bit, I added homegrown daikon radish and purple pak choi greens this time, and I used the more traditional rice noodles instead of cellophane noodles this time. It’s a very adaptable recipe, though, and I urge you to try it if you have leftover turkey and stock in the house. I for one will be eating this for the next few days, quite possible for each and every meal, until my leftovers run out. 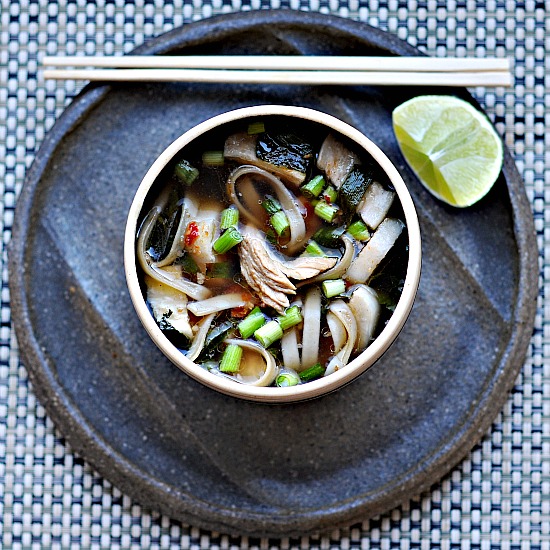 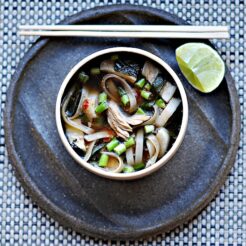 Recipe for Pho with Turkey Leftovers 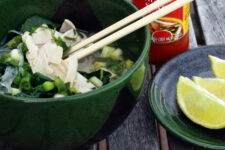 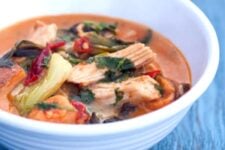 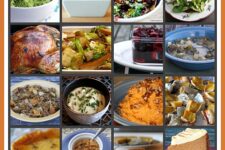 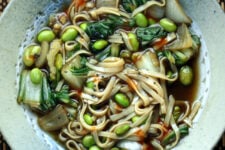 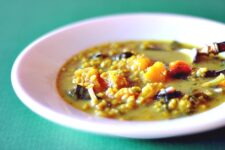