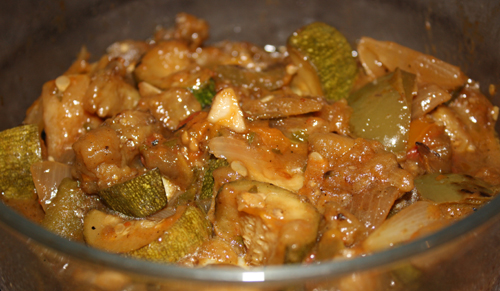 In honor of all things (Julie and) Julia, I recently pulled out and have been reading through my first edition copy (one of the benefits of my stint as a rare and used bookseller a few years back!) of Mastering the Art of French Cooking. 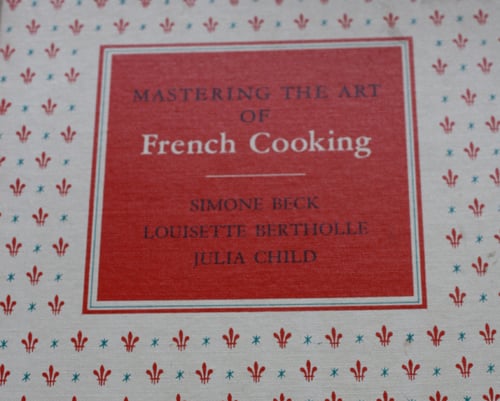 When I found out about the 4th annual Julia Child birthday celebration blogging event from Kalyn of Kalyn’s Kitchen, I decided to make one of the recipes from the book. But I’ve kind of been going overboard with the baking and ice cream lately, so I didn’t want to do something too rich (and most of the recipes in the book do indeed fall into that category- I really have to hand it to Julie Powell for cooking and eating all 524!).

The ratatouille recipe seemed the perfect one to try, since (don’t tell anyone) I have honestly never made a “proper ratatouille” before. I’ve never taken the time to seed the tomatoes and I usually just sauté all the requisite ingredients together.

I recently learned, however, (thanks to Melissa D’Arabian, winner of this season’s The Next Food Network Star) that this is not how you are supposed to make this dish; in order to “do ratatouille right”, the vegetables should be cooked separately in a layered fashion so they retain their individual characteristics and so that the flavors build upon one another.

As stated in the book (see above), this ratatouille is not quick to prepare; in fact, it’s pretty “high maintenance” in my opinion. But I promise you it is worth it; it’s by far the best ratatouille I’ve ever tasted.

Directions:
Peel the eggplant and cut into slices 3/8 inch thick, about 3 inches long, and 1 inch wide. Scrub the zucchini, slice off the two ends, and cut like the eggplant. Place in a bowl and toss with the salt. Let stand for 30 minutes. 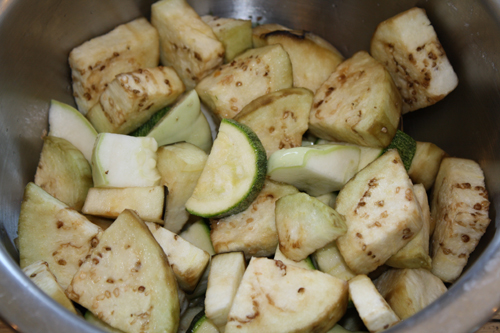 Drain your eggplant and zucchini slices and dry them on a towel. 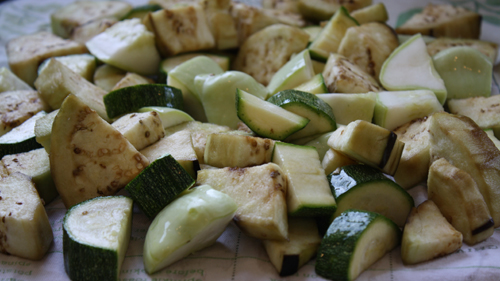 One layer at a time, sautée the eggplant, and then the zucchini in hot olive oil for about a minute on each side to brown very lightly. Remove from the pan and set aside.

In the same skillet, cook the onions and the peppers slowly in olive oil for about 10 minutes, or until tender but now browned. Stir in the garlic and season to taste. 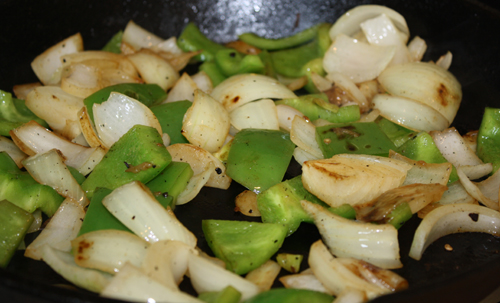 Boil a small pot of water and immerse your tomatoes for about 10 seconds. Remove, cool, and peel off the skins. 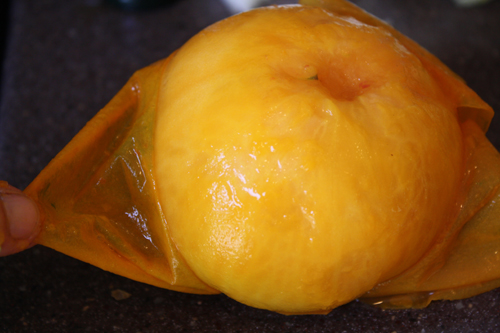 Slice the peeled tomatoes through the center, and gently squeeze them over a bowl to extract the juices and seeds. Slice the juiced and seeded tomatoes (Julia calls this the “tomato pulp”) into 3/8 inch strips. 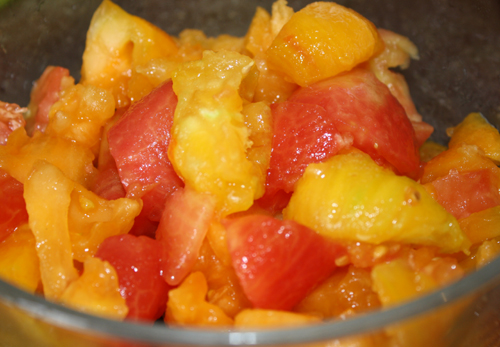 Lay the sliced tomato pulp over the onions and peppers. Season with salt and pepper. Cover the skillet and cook over low heat for 5 minutes, or until the tomatoes have begun to render their juice. Uncover, baste with the juices, raise heat and boil for several minutes, until juice has almost evaporated. 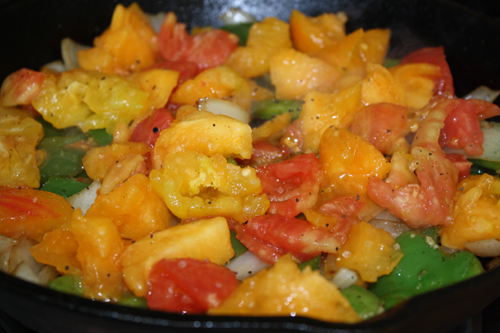 Place a third of the tomato mixture in the bottom of a heavy casserole pot (the recipe calls for a 2 1/2 quart fireproof casserole about 2 1/2 inches deep) and sprinkle over it 1 Tb. of parsley. Arrange half of the eggplant and zucchini on top, then half the remaining tomatoes and parsley. Put in the rest of the eggplant and zucchini, and finish with the remaining tomatoes and parsley. 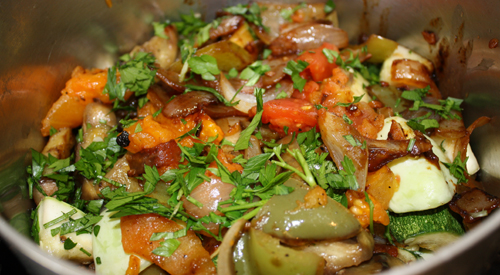 Cover the casserole and simmer over low heat for 10 minutes. Uncover, tip casserole and baste with the rendered juices Correct seasoning, if necessary. Raise heat slightly and cook uncovered for about 15 minutes more, basting several times, until juices have evaporated leaving a spoonful or two of flavored olive oil. Be careful of your heat; do not let the vegetables scorch in the bottom of the casserole.

Set aside, uncovered, and reheat slowly at serving time, or serve cold. 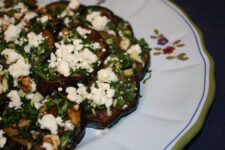 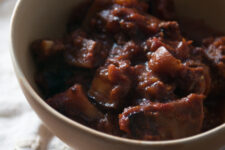 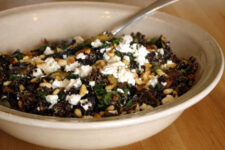 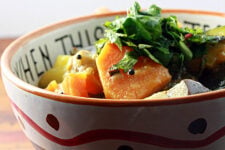 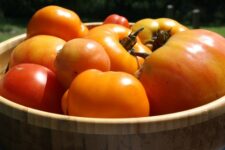 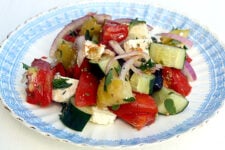