Wanna go on a sweet adventure? Check out this list of fruits that start with the letter G.

Whether you’re looking to expand your fruit knowledgebase or trying to win a game of Scattergories, this guide will help you along the way.

From the exotic gac fruit to the humble grape, you’ll learn about all sorts of fruits that start with G.

Originating in Southeast Asia, the gac fruit is a feast for the senses.

Once you crack open the bumpy orange exterior, you’ll find sweet juicy flesh inside. Don’t expect much in the flavor department since gac fruit tastes mild and bland.

Gac fruit’s uses range from traditional medicine to new-age supplements, thanks to its high dose of lycopene and beta-carotene.

At first glance, you might confuse goumi berries with cherries, and the two varieties share some fundamental similarities.

Both berries grow on a tree and contain a pit in the center. However, the seed in the goumi berry is actually edible, unlike its cherry counterpart.

As far as flavor goes, expect a tart, acidic taste similar to a crabapple. You might prefer using goumi berries in desserts or jams instead of raw.

The grapefruit is a tropical mainstay in U.S supermarkets, but did you know they’re among the healthiest citrus fruits you could eat?

Grapefruits are a breakfast staple for a good reason. The ruby fruit contains Vitamin C, A, and vital antioxidants.

You can trace the origins of grapefruits to Barbados, where it is said to have existed since the 17th century. It’s a hybrid between the sweet orange and sour pomelo fruit.

You’ll love gamboge if you’re a fan of sour fruit. It has a tart, acidic flavor that will make your mouth pucker.

This small yellow fruit has a thin, smooth exterior that resembles the skin of a lemon.

At first glance, you might confuse granadillas with passionfruit. Both have a similar shape and edible seeds, but there are a few key differences.

Granadillas are usually larger than passionfruit and have black pulpy seeds compared to yellow ones.

This native South American fruit also has an orange skin that’s hard and shiny when ripe. Expect a medley of sweet and sour flavors every time you scoop a bite of pulp into your mouth.

This tropical fruit is a staple for many diets south of the border, and for good reason. It’s extremely rich in iron and phosphorus.

It also has mild laxative properties since there’s an abundance of dietary fiber and ferulic acid in each serving. Genip fruit tastes somewhat wine-like, with a tart and tangy sweetness in every bite.

Greengage fruit is a natural hybrid of the European plum and tastes just as sweet, if not more. If you sink your teeth into a greengage fruit, you’ll taste sweet, syrupy flesh that tastes like honey.

Each fruit is oval, small to medium-sized, and green in color. The skin is extremely thin, taut, and smooth.

The majority of guarana is grown for use in energy drinks, sodas, and extracts. It’s rich in antioxidants, including catechins, vital for neutralizing free radicals.

If you ever try a whole guarana fruit, you’ll notice a crisp, tart flavor like an apple with a berry-like aftertaste.

This juicy fruit adds a little taste of the tropics to any dish. It also makes a delicious smoothie, especially when combined with bananas, oranges, and coconuts.

Aside from its sugary sweet flavor, it’s also rich in key nutrients such as vitamin C, A, and folate. You’ll also find a whopping 9g of fiber in each fruit.

The guava has bright yellow-green skin with stunning pink flesh that looks like a watermelon.

Grapes are one of the oldest fruits around and are thought to have been cultivated over 8000 years ago.

Aside from eating them whole, the uses for grapes are abundant, ranging from wine, raisins, and jam.

You might be surprised to learn that grapes are a nutritional powerhouse since they contain an impressive amount of vitamins and nutrients. You’ll find a high dose of copper, vitamin K, thiamine, and riboflavin in just a single cup of grapes.

The grumichama is also referred to as the Brazilian cherry. Like its namesake, this berry is native to South America and other tropical climates.

This fruit is not that common since it takes a long time to grow, has a low production rate, and is currently considered an endangered species.

If you happen to come across this rare berry, you’ll notice that it has a shiny dark red exterior with white flowers poking through the top. It tastes juicy and plum-like with a stone fruit sweetness.

Ground plums are the overshadowed offspring of the astragalus crassicarpus, a perennial revered for its beautiful lavender flowers.

You’ll find this species in the American midwest prairie land where it originated.

This fruit has thick flesh and tastes similar to a sweet pea. It’s less sugary than other plum species and can have a tough texture depending on the season.

While the fruit of the ground plum is edible, the rest of the plant is poisonous.

You might’ve seen goji berries pop up in health food stores. That’s because each berry is packed with powerful nutrition.

Just 5 tablespoons provide you with more than your daily recommended amount of vitamin A and a high dose of iron and vitamin C.

These berries resemble small cherry tomatoes and are native to Asia. They have a brilliant red hue that glimmers in the sunlight.

Goji berries are delicious too. You’ll find their flavor to be sweet, tart, and juicy.

There are wide varieties of gooseberries, but the primary two are American and European.

When eaten raw, gooseberries tend to be sour and mouth-puckering. That’s why you’ll often see them as a flavoring agent in drinks, jellies, and desserts.

There’s a hefty amount of vitamin C in gooseberries and a modest amount of B vitamins.

Also known as the Madagascar or Batoko plum, the Governor’s plum is a tropical species native to Africa. They look like European plums but are smaller in shape and lighter in color.

If you sink your teeth into a raw Governor’s plum, you’ll notice that it tastes slightly bitter and astringent. This particular species tastes better when used in cooking or baking.

Greek figs stem from a tree botanically classified as ficus carica, a member of the mulberry family.

The fruit skin varies in color and ranges from green to purple, red, and yellow. Inside, the flesh has a stick consistency with abundant tiny edible seeds.

Greek figs are rich in potassium, fiber, calcium, and iron. They’re also an excellent source of antioxidants, including lutein, tannins, and chlorogenic acid.

The golden kiwi resembles its green counterpart except for a few key details.

This fruit gets its name because of its deep yellow flesh. You’ll also notice the absence of fuzz on the skin.

The golden kiwi tastes similar to strawberries, with a sugary, berry-like sweetness. 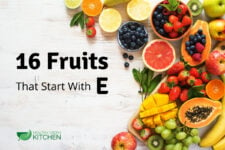 16 Fruits That Start With E 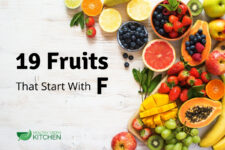 19 Fruits that Start with F 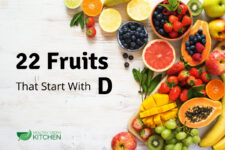 22 Fruits that Start with D 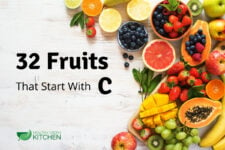 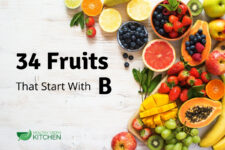 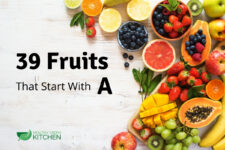