This month’s Charcutepalooza challenge was The Salt Cure. Using Charcuterie

as our reference guide, Cathy and Kim tasked us with making fresh bacon.

If you’ve been reading my blog for a while, I’m pretty sure I’ve mentioned at some point that in my teenage years, I was a vegetarian. And that in my early twenties, I was vegan. I love animals, and honestly would prefer not to eat them. But health-wise, neither of these diets worked for me, so I’ve been eating animal foods for the last 15 years or so.

The amount of meat-y posts that you see on this blog is a pretty accurate reflection of how often I eat meat (not all that often). I am not afraid to admit that I enjoy bacon, though: I’m not obsessed with it (I don’t put it in cupcakes or anything) but I like to have a piece or two for breakfast every now and then. And sometimes I use it in my recipes. Because let’s face it: nothing tastes like bacon. I always buy bacon that is labeled as “uncured”/”nitrite-free” and always suggest my readers do the same when I use it in a recipe like this one because I have concerns about the connection between nitrites and cancer.

I had a lot of reasons for signing on for Charcutepalooza. Among them: I adore Cathy and Kim, I enjoy community blogging events, the grand prizes are great, and I am a big fan of DIY kitchen projects. But maybe the biggest reason is because I care about the food I eat. I care A LOT. And I am not talking about taste here.

I care about what’s in what I eat. This is why I use only real food ingredients when I cook. This is why I garden. And keep organic chickens. And shlep to buy raw milk. And it’s why I write this blog: to inspire others to care, as well.

So I found the idea of making homemade bacon without preservatives, with the best quality pork belly available, very appealing.

Then I looked over the bacon pages in Charcuterie

. And I got a little worried. Turns out bacon gets it’s characteristic color and flavor from something called pink salt (aka “curing salt”…not Himalayan pink salt); pink salt is also helpful for discouraging the growth of bad bacteria, something you definitely don’t want in your homemade bacon. None of this would be a problem for me except for the fact that pink salt contains nitrites. Plus it is neon colored and needs to be handled with gloves: it’s not something I wanted to put into food I was going to eat and feed my family. Have we Abramsons ingested foods containing pink salt before? Yes, I am sure we have. But did I want to use it if I could avoid doing so? No.

Please be assured that I am not judging anyone else for using pink salt.
I just wanted to make my bacon without it.

So I re-read the bacon pages in Charcuterie

and noted that Ruhlman says it’s ok to make bacon without pink salt. It’s just not going to taste like commercial bacon. I reasoned with myself: I wasn’t planning to smoke it so already it wasn’t going to taste like “normal” bacon, right? During the tweet-up with charcuterie expert Bob Degrasso, I asked a lot of questions: I was basically looking to confirm that I would not die if I didn’t use pink salt. Bob wasn’t entirely supportive about not using the pink salt (he believes the reasons to use it far outweigh the reasons not to) but he didn’t outright call me an idiot either. Which I appreciated ;) I did learn that I’d be an idiot to make rolled pancetta without pink salt, though. If you do that, you really could die of botulism…

If you want to read more about pink salt and other issues related to food safety and meat curing, Ruhlman recently published this post: his stance is clear: he doesn’t think pink salt poses any health threat whatsoever if you use it in the small amounts that his and other charcuterie recipes recommend. He also points out that when you are purchasing “nitrite-free” bacon in the store, you are purchasing bacon made with celery juice instead of pink salt, but that celery juice is, in truth, a natural source of nitrites. Hmmm….

Call me stubborn, but I still didn’t want to use pink salt.

I did some research online and found this recipe for home cured bacon from Saveur. It does not include pink salt, so this is the bacon I made.

I used a 5 pound piece of organic and grass-fed pork belly that I purchased at Fleishers. The folks there were entirely supportive of me making bacon without pink salt by the way. It’s how they make it in-house, because they understand that people who make the trek and spend the money to buy pastured meat for health and ethical reasons also want to be able to buy bacon made without pink salt.

So. When I got it home, I noticed that the layer of skin with the nipples was still attached to the belly. It made me a little uncomfortable. And a little sad. This was the belly of an animal. A real live animal- one with nipples. I don’t mean to sound corny but this was kind of a “big” moment for me. I mean, how easy is it to walk into the store and pick up a package of bacon or meat or whatever, take it home and cook it, and be completely disconnected from the fact that it was once a whole live animal? In this day and age, even if you are accustomed to buying your meats from a farmer, I think it is still easy to disconnect yourself from the real live animal that provided that meat. It reminded me that it’s so important to be grateful for the animal foods, for all the foods, really, that we get to eat. Again, not meaning to be corny here- just letting you know what came up for me when I was making bacon.

But I digress. Back to the recipe. Besides doubling all of the rub ingredients to accommodate the larger piece of pork belly, I made a few substitutions in the Saveur recipe: I used dark muscovado sugar in place of white sugar, I used a mix of four peppercorns including pink peppercorns, and I used dried sage instead of dried rosemary.

I massaged that belly, nipples and all, with the spice rub. Then, for seven days, I kept the belly in a zip lock bag in the refrigerator, and massaged it some more each and every day. After the week, I rinsed off the rub (which had developed into a brine at that point). Make sure to rinse it really well, or your bacon runs the risk of being too salty.

This is what it looked like after the brining/rinsing: 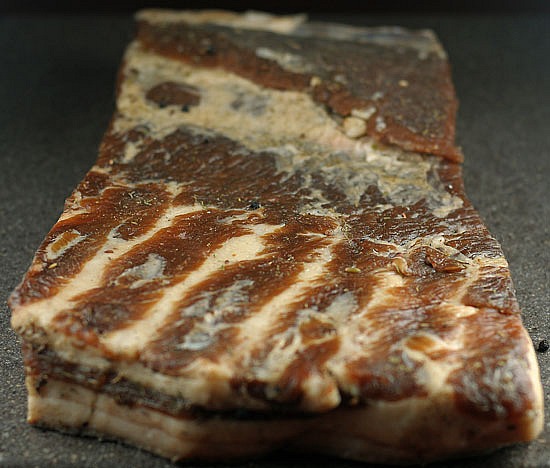 After it was rinsed and thoroughly dried, I roasted the bacon at a very low temperature as instructed in the recipe. Then, with a very sharp knife, I cut off the skin (along with the nipples), and sliced it (thick is best for homemade bacon). I put my bacon in the freezer for storage because this is the safest place to keep it if you make it without pink salt.

I haven’t yet mentioned that I had a mini freak out when I bought my pork belly because it was really expensive. Like $76 for the 5 pounds expensive. It was honestly a gorgeous piece of belly, though (nipples and all). Thick and fatty like pork belly should be. If you are making bacon at home, I personally don’t see the point of purchasing a cheap piece of belly to do it with. It’s just my opinion and if you don’t want to spend big bucks on pork belly that’s your business…I just feel like you might as well “go big or go home” when it comes to stuff like this: invest in the best ingredients you can afford, then savor and be grateful for each and every bite.

If you have a nice and fatty pork belly, there’s probably an area that’s pretty much all fat. You can cube this part up and make lardons. I’ve actually never had lardons before this challenge, but fried some up and put them on top of soup. I can’t remember the exact words I used on twitter, but it was something to the tune of: “they are morsels of salty, fatty deliciousness”. Seriously…I have a stash of these in the freezer now and look forward to using them in other dishes. 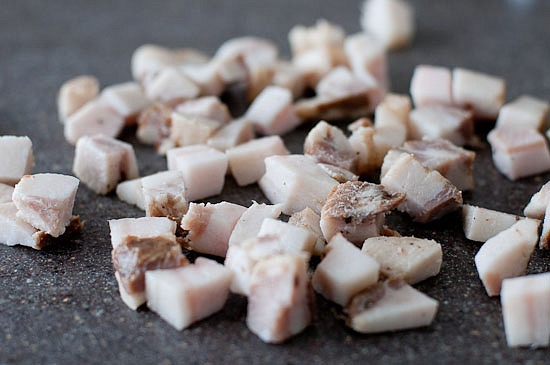 I found that when I fried my homemade bacon, it tended to burn easily. So I tried baking it instead, and was much happier with the results. My favorite way to cook it is to take a couple of slices out of the freezer to defrost, rub them generously with ground cinnamon and pure maple syrup, then place them on a rack over a baking pan in a 375 degree F. oven until they are beautifully browned. It takes about 20 minutes. Here is the cinnamon maple bacon over a fried egg (from my chickens) with gluten-free toast:

In addition to making homemade bacon, I also decided to make two other recipes that illustrate the concept of the salt cure. So I made a big jar of preserved Meyer lemons. I used the super easy recipe from Charcuterie

. All you need is lots and lots of salt… 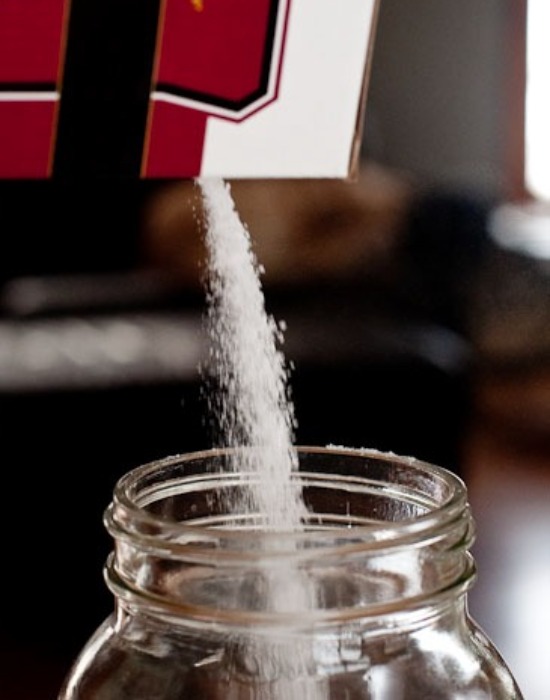 and lemons. Lots of those, too. I was lucky enough to have Meyer lemons sent to me by the lovely Kim of Rustic Garden Bistro, but you can use regular lemons, too (organic are best, though, since you are going to be ingesting the peels). You shake your jar daily for a month, then you’ve got preserved lemons to last, well, these are going to last me a very long time.

Finally, I made salt cod, using sustainable Alaskan cod from Vital Choice. Salt cod (aka Baccala) is something I have never had before but I had the cod in my freezer and it’s easy to make. All you need is- you guessed it- cod and salt (Matt Wright did an excellent post about salt cod here). 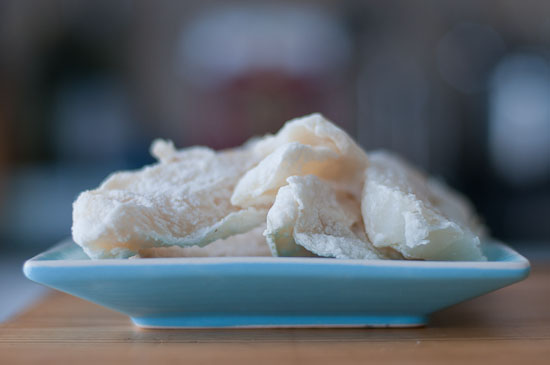 Salt cod is a traditional food popular in areas of Europe including Italy and Portugal. Originally prepared because of practical reasons (it was a way to keep fish preserved for a long time back when there was no refrigeration), it is still enjoyed in those parts of the world for reasons of taste. I plan to use it in a soup in the very near future, and will share the recipe when I do. 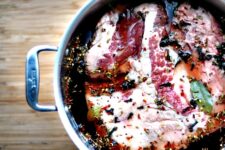 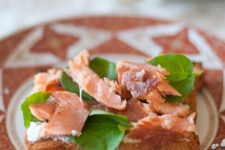 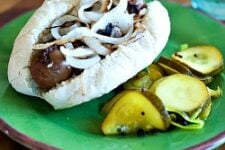 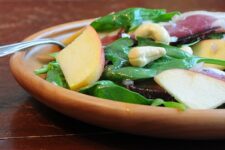 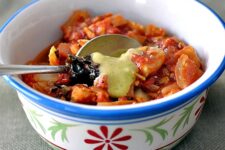