The January 2010 DC challenge was hosted by Cuppy of Cuppylicious and she chose a delicious Thai-inspired recipe for Pork Satay from the book 1000 Recipes by Martha Day. 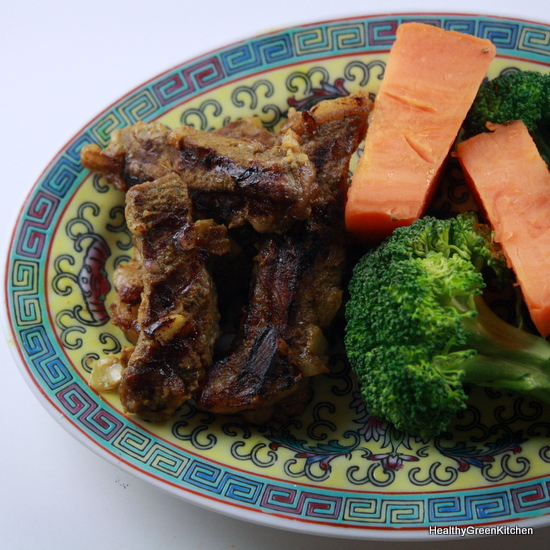 Since I am still making my way through the 40 pounds of grass-fed beef I purchased as part of a cow share program, I used beef instead of pork in the satay recipe. Feel free to change it up and use another meat such as chicken, or use fish, seafood or tofu instead.

Satay (aka sate) is a Southeast Asian specialty of spicy skewered meat that is typically cooked over a charcoal fire. According to the book Savoring Southeast Asia by Joyce Jue, food historians believe the idea for satay originated in Indonesia. It was most likely inspired by early the Arab traders’ kabob.

Satay is a popular “street food” all across Southeast Asia. The ingredients used to make satay vary from region to region, but turmeric, which gives satay its distinct yellow color, seems to be ubiquitous as a marinade ingredient. There is a definite Indian influence in the marinade we used for the Daring Cooks’ recipe (hello cumin and coriander), but the peanut coconut sauce recipe is probably closer to what you’d find in Thailand.

The key to a flavorful satay is the marinade, so do this part 6-24 hours before you plan to eat.

Cuppy mentioned that if you’d like a more Thai flavor in your marinade, you can try adding a dragon chili, an extra Tb. of ginger root, and 1 Tb. of fish sauce.

Mix all marinade ingredients together in a medium bowl. Cover beef with marinade and refrigerate for 6-24 hours.

If using wooden or bamboo skewers, soak your in warm water for at least 20 minutes before preparing skewers.

Gently and slowly slide meat strips onto skewers. Discard leftover marinade (though if you’re grilling or broiling, you could definitely brush once with extra marinade when you flip the skewers).

Broil or grill at 290°C/550° F (or pan fry on medium-high) for 8-10 minutes or until the edges just start to char (I actually cooked mine on a panini press, so it cooked much faster). Flip and cook another 8-10 minutes.

Cucumbers and onions are traditional condiments for satay. I served mine with a small bowl of rice-vinegar drizzled cucumber slices and some steamed sweet potatoes and broccoli to balance the super seasoned satay. Both the meat and the vegetables were wonderful dipped in the sauce. If you’ve never made satay at home, do try it. 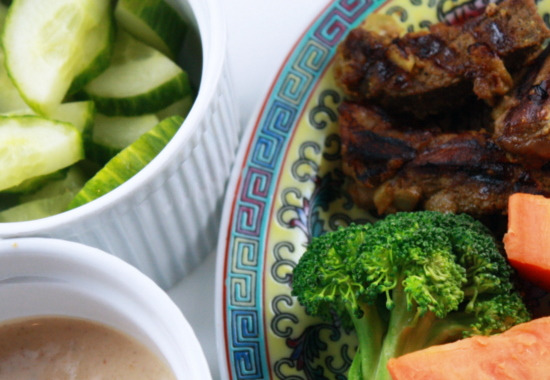 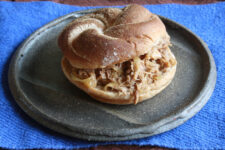