When it comes to choosing foods that have a positive impact on your overall health, fermented foods have certainly earned a position near the top of that list.

These plant-based fermented products have gained popularity around the globe more recently, leading many to wonder if other acidic veggie snacks like pickles are also the result of fermentation.

But the answer to the question, “Are pickles fermented?,” isn’t as straightforward as you might think. And to understand why we first must understand the differences between fermenting and pickling.

The Difference Between Pickling and Fermenting

The main difference between pickling and fermenting is that fermenting involves microbes that change the chemical makeup of the product. Pickling, on the other hand, simply involves the preservation of food in brine or an acidic solution. It is very possible to have a product that’s both pickled and fermented.

It is the action of the fermenting bacteria that gives traditionally fermented pickles their acidic taste. Straight pickled pickles, on the other hand, get their puckery flavor from the addition of vinegar.

Most fermented veggies start in a cloudy brine bath. As the salt breaks down the cellular structure of the plant, the lactobacteria naturally present in the environment get to work breaking down the carbohydrates.

These gut-friendly bacteria are especially good at breaking down starches and sugars and turning them into lactic acid. It’s this process that gives fermented foods that sour, acidic taste. It is also what allows these foods to be stored for extended periods of time.

Eating these types of fermented foods is thought to be beneficial since you inevitably also consume the healthy bacteria present within them. These probiotics have been associated with a number of health benefits including lowered cholesterol, better digestive function, and weight loss.

While fermenting is a very specific process, pickling is much more of a broad term.

To pickle something simply means to preserve it using brine or acid. Technically speaking, fermented vegetables are pickled because of the salt bath used to kickstart the process. But, not all pickled vegetables are fermented.

Some veggies are simply preserved using vinegar or lemon juice. In these cases, no fermentation occurs and the products carry no added health benefits outside the vitamins and minerals naturally present in the vegetables and pickling medium.

Pickles are placed in different categories based on both the production process they undergo and the flavor compounds used in their creation. Below, are some of the more common pickle designations.

Dill pickles can be both pickled in a vinegar brine solution and fermented in a high-salt brine. What determines a dill pickle is the addition of dill sprigs and seeds to the bath. These additions are what give dill pickles their signature slightly-sweet, mostly-sour flavor.

Kosher dill pickles can also be fermented or simply pickled. The only difference between the two is that kosher spears have a copious amount of garlic added to the hot brine bath in addition to plenty of dill. This kind of spear is referred to as a kosher dill pickle simply because adding garlic to the recipe is the traditional preparation used by Jewish New York kosher delis.

Gherkin pickles are another common dill variety found in stores. Gherkins are a specific type of cucumber prized for their small size and smooth skin.

Half-sour pickles are fermented pickles that aren’t given enough time to finish the fermenting process. This leads to an interesting mix of flavors and textures somewhere between fresh cucumbers and the sour taste you get with real pickles.

For the crunchy pickle lover, half-sour pickles are the way to go. But you’ll have to go to the refrigerated section to find them. That’s because the halted fermentation process allows the potential for bad bacteria to grow inside the jar.

By keeping these spears cold, the jar becomes a less ideal environment for undesirable bacteria to thrive and thus remain safe to eat. Most other refrigerated pickles you’ll find in the store are either not fully fermented or vinegar pickles that have not been canned.

Sour pickles, also commonly called “real pickles,” are fermented pickles that get their sour flavor from fermentation rather than the addition of vinegar. These products always contain natural bacteria that are beneficial to your gut and immune system.

Because these products are fully fermented, they exist in a highly acidic, anaerobic environment. Undesirable bacteria cannot thrive in this environment, which means sour pickles last a long time before they expire.

So, are Store-Bought Pickles Fermented?

When it comes to a vinegar pickle, specifically, the answer to the pickling vs fermenting debate really depends on the product itself.

Traditionally, all pickles were created through fermentation. If you buy pickles at the farmers market you are most likely getting fermented pickles with all those lovely probiotic health benefits. If you pickle your cucumbers at home, you have the option of going the fermentation route, which is more than worth the time and effort.

However, if you are buying your pickles at the grocery store, more than likely you are getting a product that has simply been pickled in vinegar without fermenting.

While simply pickled pickles are still a healthy snack, it is worth noting that many commercial brands also contain food dyes and preservatives, which may have a negative impact on your overall health.

If you are interested in trading in your standard pickled pickles for the fermented type, try looking for more artisanal products at your local food co-op or natural grocery. It isn’t always easy to tell if a pickled product has been fermented, but those toting “traditional” processing methods, small batches, and quality ingredients are more likely to contain beneficial bacteria.

Any product containing preservatives or dyes has most likely not been fermented since those additives would most likely interfere with the fermentation process.

If you are still struggling to find quality fermented pickles, it is worth giving the process a try yourself. All you need are some organic pickling cucumbers, water, salt, spices, a clean jar, and a little time.

Check out the recipe below to make your own easy, yet deliciously satisfying, homemade fermented pickles.

But be warned, once you taste the awesomely gratifying flavor of fermented pickles, you may never be able to eat a standard dill again. 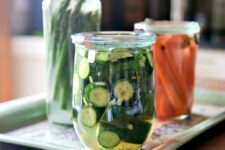 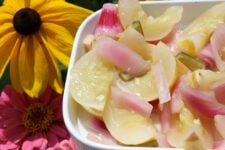 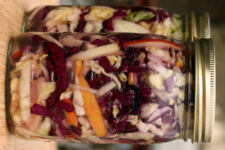 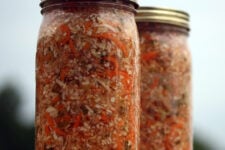 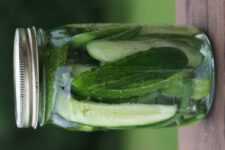 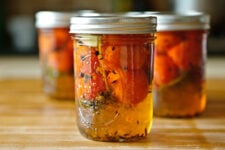